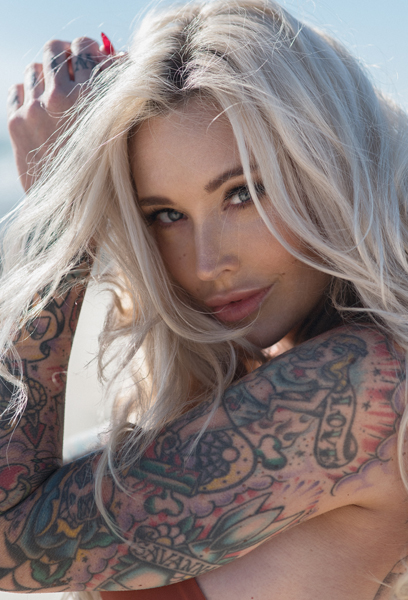 Sabina has been modeling professionally for over 20 years and dancing since the age of two.  She is professionally trained in ballet, tap, jazz, hip hop, and pointe.  She went from a small town ballerina to a big time Las Vegas showgirl performing in Jubilee, for 2 years at Ballys Hotel, and guest headlined for 1 year in the show PinUp, at the Stratosphere casino, where she was the first heavily tattooed showgirl to headline on the Las Vegas strip.  She guest starred in X Burlesque at the Flamingo in Vegas, and also just guest starred in X Country at Harrahs casino in Las Vegas.

While modeling with a lot of tattoos goes against the industry norms, Sabina has been very successful in the mainstream-modeling world.  Standing at a statuesque 5’10″ with platinum blonde hair, gorgeous features, and tattoos, she has gained the respect of many in the industry. Her success is due in part to her incredible versatility.  She is the best when it comes to pinup modeling, but also specializes in fashion, glamour, swimsuit, and lingerie shoots.  Sabina shows the world that you can be heavily tattooed and still be beautiful, classy, and sexy.  She loves to break boundaries and take tattoos to a whole new level in the mainstream fashion world.

Sabina was a permanent celebrity judge on the TV Show Best Ink, on Oxygen that has aired 3 seasons.  She was also on the 2nd season of The Look All Stars, as a celebrity model.  She did her first feature film Inside Game, which was in theaters Nov. 2019.  Sabina plans on doing more in the tv and movie world.

Sabina is a model, tv personality, business woman, wife and mother, and she manages to do it all with grace and style.